For free, or not for free? 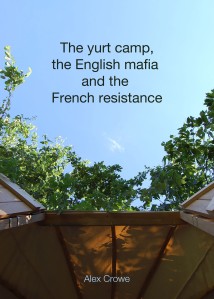 This is part one of my book. I wrote it last Winter, published it last year, promoted it on my blog and sold it for €1 a time through Amazon and a now-closed shop on the écovallée facebook page. I sold a few dozen copies (which paid for some hay for the horse this Winter) and got some excellent reviews.

So I have devised a plan that I hope will not upset my existing readers. This plan, I am calling: “Read now, pay later – an experiment in crowd sourcing”. The reason I hope my existing readers will not be too upset is that this plan should speed up the writing of part two, the tantalising title of which is revealed at the end of this book.

I’m making “The yurt camp, the English mafia and the French resistance” available for free as a downloadable pdf. If successful, the plan will go like this:

o You read it.

o You like it, love it, or believe it’s the best thing you’ve read since your last trip to the dentist, and feel that I deserve some money as a reward.

o You transfer the amount you think it’s worth into the bank account detailed at the end of the book.

As soon as I hit the magic 1,000 sales, I will start working on part two. (Full disclosure: I am only planning on writing three parts of this book.)

You download the book, you pay what you think it’s worth.